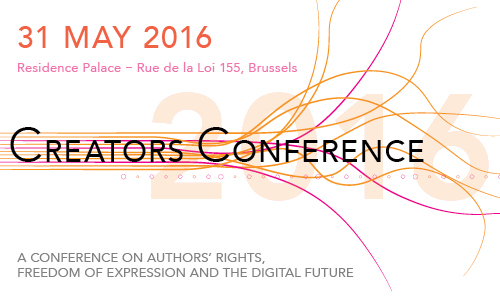 Towards a Modern, more European Copyright Framework and the Necessity of Fair Contracts for Creators

The Authors’ Group, representing more than 500 000 authors, including writers, literary translators, composers, songwriters, journalists, screenwriters, film and TV directors in Europe gathered in Brussels on 31 May 2016. They approved the Declaration Towards a Modern, more European Copyright Framework and the Necessity of Fair Contracts for Creators.

“We, authors: writers, literary translators, composers, songwriters, journalists, screenwriters, film and TV directors from all over Europe: Reaffirm that a creative work, irrespective of its length, quality and completeness, is the result of talent, inspiration, imagination, intellectual reflection, dedication and experience. It also results from a process requiring time, skills and judgment (…) Nonetheless, we observe with great concern the persisting imbalance between the parties’ bargaining power in copyright contracts’ negotiations to the detriment of authors (…) The European copyright framework must assert the role of authors as the source of the creative industries, which provide 7 million jobs in the EU, by strengthening the bargaining position of authors when dealing with the first intermediaries of the value chain.”

The Creators Conference 2016 was organised by ECSA in alliance with the European Writers’ Council (EWC), the European Federation of Journalists (EFJ), the Federation of European Film Director (FERA), the Federation of Screenwriters of Europe (FSE) and Freemuse with the support of the EU Creative Europe programme, the European Grouping of Societies of Authors and Composers (GESAC), the Swedish Society of Songwriters, Composers & Authors (SKAP), Authors’ Licensing & Collecting Society (ALCS), VG WORT, deAuteurs, the Directors’ Guild of Slovenia (DSR) and the Collecting Society of Authors, performers and Film Producers of Audiovisual Works of Slovenia (AIPA).